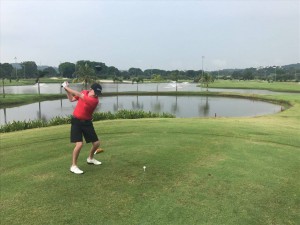 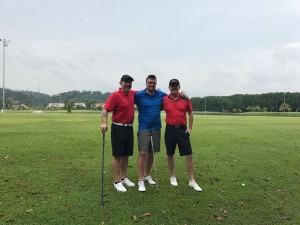 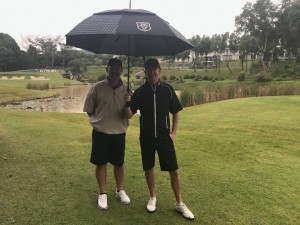 Dreich, damp, dismal, depressing, dilapidated and diarrhea are all words that have been used to describe Kirkcaldy (the Town, not Peter) but unfortunately that was the weather for most of last Saturday when the SSAS rocked up to South Links.

Not to be undeterred, the 30 hardy souls ventured out in the hope it would clear.
Some (who will remain nameless) foraged into the depths of their bags and cracked open waterproofs that hadn’t seen the light of day since Lee Risk had hair. Those crusty Sunderland’s smelled as bad as the weather but opted thankfully to go for the wet look rather than the stinky one.
South Links has a tendency to be a busy course but it wasn’t the usual Mustapha Shopping mall on a Sunday so we got round in plenty of time and relatively unscathed.

The course itself had lended itself well to the conditions, not too squelchy underfoot with the greens receptive and surprisingly fast. It’s a good set up at South Links but definitely favours the bigger (straighter) hitters and especially on a day where the ball ran as far as Duncan does.
Scoring was as expected on the lower side with only one score managing 36 or better. That being said, plenty in the 30’s which is not to be sniffed at.

Novelty prizes turned out not to be a novelty at all but the usual suspects with Tom Sanders winning closest to the pin and Barry Skelton winning longest drive.

Barry has won the longest drive so many times now he has more hats that JR Ewing; wonder what he does with them since he never wears one?
Our Champion golfer of the day and winner of the golden gong was Texas’s very own Jonathan Fox. Well done the fantastic Mr Fox.
Actually to Jon’s eternal credit, he approached me after the draw was posted and said he hadn’t played with the Society for a while and thought his handicap was a bit high off 24 and should be about 18. Being too lazy to do anything about it I said we’ll see what happens after the round and adjust if necessary.

OOO hark it him, my handicap’s too high cut me before I play! Jon actually scored himself off 18 on the day and still managed 39 points. He’ll enjoy it even more at the Chieftain’s Trophy next month playing off 16…

A small note of disappointment. We are to lose Jon Leadbetter at the end of this month as his sojourn in Singapore comes to an end. Good luck Jon in your future endeavours in America. You’ve been a fantastic supporter, made many friends, and will be sorely missed. Haste ye back.
The next outing is the main event for the year, ‘The Chieftain’s Trophy’. As is customary, it will be held at Ria Bintan on the 27th May.
I’ll send out a flier shortly but it’s imperative that a) we get a good turn out and b) you try and let me know as soon as possible as we’ve been press ganged into putting deposits down for ferries etc.

There is a wee deal on a stay and play, so I’ll let you know what that is too so you may want to start planning.